Today we’re looking at PowerCmd, another Windows console replacement. It is available at http://www.powercmd.com. The most recent version is from May 2011. 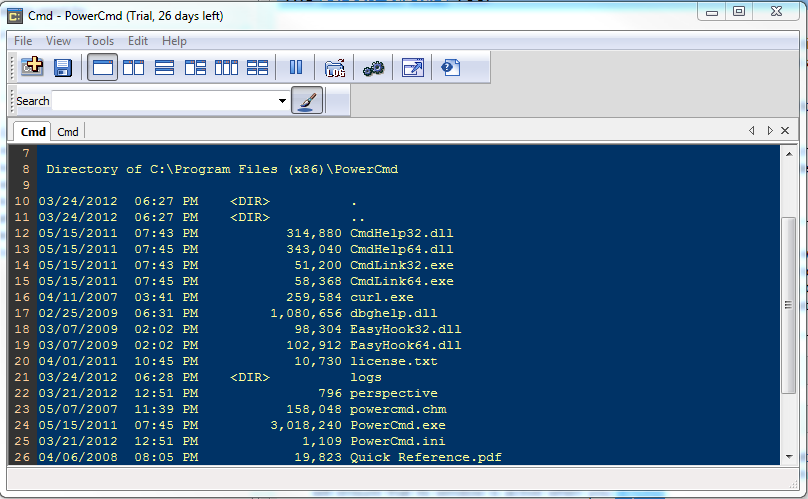 Note that like Mintty, Console2, and PromptPal, PowerCmd is not a replacement for the Windows CMD command prompt. PowerCmd will start (only) CMD in a new tab window, though you can then load some other command shells (like PowerShell, Bash, etc.). It does not work with TCC or some other command line apps — the TCC output appears, but PowerCmd doesn’t respond to any keyboard input. (Perhaps because TCC reads input a character at a time using a different Windows API than the line-at-a-time API used by CMD?)

PowerCmd adds some features not available in the standard Windows console:

PowerCmd’s display output speed is substantially slower than the stock Windows console, and more than 4 times slower than Take Command. (See the table below.) The line folding and history log options were not enabled for this test; enabling them slows the display output significantly. PowerCmd also didn’t scroll the display smoothly; there were long pauses before it displayed the next page (sometimes several thousand lines further along). The wait cursor would also appear periodically, as well as a “(Not Responding)” message in the PowerCmd title bar.

So how does this compare to Take Command?

So the features in PowerCmd that don’t have a counterpart in Take Command tab windows (though they are in the IDE / batch debugger) are:
I’m unconvinced of the usefulness of these (certainly nobody’s ever requested them), but I’m willing to be convinced if I get some requests.

Let’s take another look at the Take Command window. (The Take Command Explorer-style Folder and List View windows, and the common Command Input window are set to Autohide in order to show a more straightforward comparison with the PowerCmd window.)

And we’ll plug PowerCmd into our comparison table:

I think we’ve exhausted what’s currently available for Windows console replacements (or tabbed windows for console applications). If anybody knows of other alternatives, let me know so I can add them to the comparisons. Barring that, I’ll start with a look at some similar apps on Linux – the Gnome Terminal, KDE Konsole, and iTerm2 for OS X.

Next time: Comparing Take Command and the Linux Gnome Terminal.