Today we’re looking at PromptPal, another Windows console replacement. PromptPal is from Technology Lighthouse, and though PromptPal is still for sale at their website, it is apparently not in active development. The most recent version is more than two years old (February 2010).

PromptPal appears to work like Mintty, by redirecting the console program output and displaying the contents in tabs in a GUI window. Like Mintty, PromptPal won’t display colors set by console applications or support console apps that change the cursor position. You can set the default foreground and background colors that PromptPal will use in the display window. 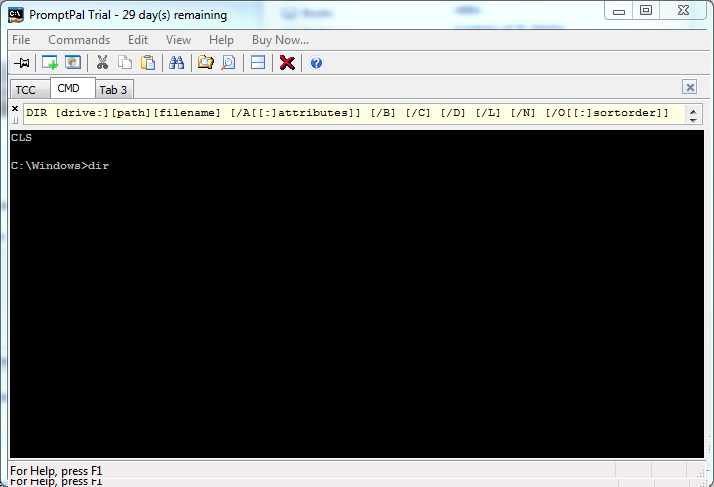 PromptPal also adds some new features not available in the standard Windows console:

Unlike Mintty, PromptPal’s display output speed is substantially slower than the stock Windows console, and more than 8 times slower than Take Command. (See the table below.)

With the possible exception of #13 (the taskbar band), there’s nothing here that isn’t already in Take Command (usually in a more powerful form):

Note that like Mintty and Console2, PromptPal is not a replacement for the Windows CMD command prompt; it is a wrapper for command line programs (like CMD, TCC, Bash, etc.).

Let’s take another look at the Take Command window. (The Take Command Explorer-style Folder and List View windows, and the common Command Input window are set to Autohide in order to show a more straightforward comparison with the PromptPal window.)

*PromptPal doesn’t include a command interpreter. It defaults to using CMD, though it will also work with others like TCC, Bash, etc.