Today we’re looking at ColorConsole, from http://www.softwareok.com. ColorConsole is a minimalist console replacement; it has a limited set of features and no help included (there is some limited help on the website). ColorConsole is very small and portable, but not very full-featured or fast (see below).

ColorConsole appears to work like PromptPal and Mintty, by redirecting the console program output and displaying the contents in tabs in a GUI window. Like Mintty and PromptPal, ColorConsole won’t display colors set by console applications or support console apps that change the cursor position. You can set the default foreground and background colors that ColorConsole will use in the display window.

Note that like the rest of the console replacements we’ve seen so far (Mintty, Console2, PromptPal, and PowerCmd), ColorConsole is not a replacement for the Windows CMD command prompt; it is a wrapper for CMD and new tabs always start CMD. ColorConsole can then run other command line applications from CMD, provided they don’t set the screen colors or reposition the cursor. 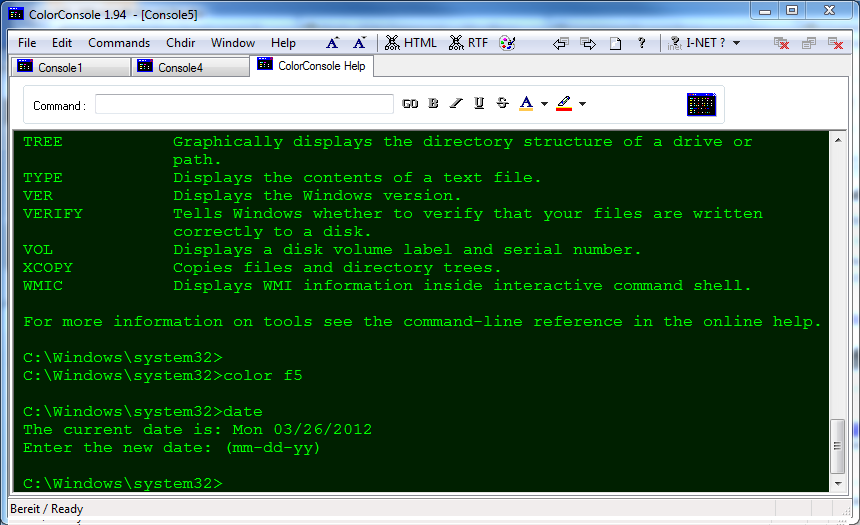 ColorConsole adds a few features not available in the standard Windows console:

Unlike Mintty, ColorConsole’s display output speed is far slower than the Windows console, and more than 50 times (!) slower than Take Command. (See the table below.)

Except possibly for #4 (saving the buffer to HTML or RTF), there’s not much here of interest for incorporating into Take Command:

I’m not aware of any other significant feature in ColorConsole that’s lacking in Take Command, but if anybody knows of something that they would like to see added to Take Command, please let me know.

By way of comparison, let’s take another look at the Take Command window. (The Take Command Explorer-style Folder and List View windows, and the common Command Input window are set to Autohide in order to show a more straightforward comparison with the ColorConsole window.)

*ColorConsole doesn’t include a command interpreter.

Summary: ColorConsole is an improvement on the standard Windows console, but it currently is the weakest (and slowest) of the Windows console replacement alternatives.