Today we’re looking at ConEmu (aka ConEmu-Maximus5), the last of the Windows console replacements that I’ve been able to find). ConEmu is an open source (BSD license) Windows console emulator with tabbed windows, which features integration with FAR Manager, a console-based file manager that is a clone of the old Norton Commander. 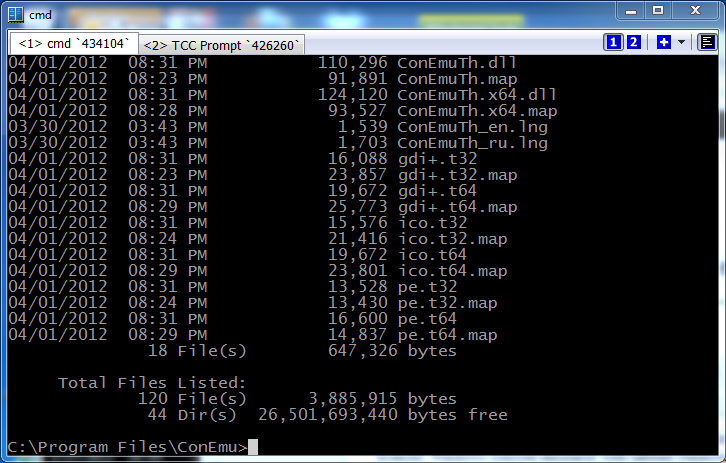 ConEmu is similar to Console2, albeit with a bit less “eye candy”. It’s apparently still a work in progress — there are a number of options for dumping debug info on ConEmu and/or the Windows console. The ConEmu window is definitely minimalistic — there is no menu or status bar. You select options by clicking on the system menu (icon in the left corner of the title bar).

Note that like the rest of the console replacements we’ve seen so far (Mintty, Console2, PromptPal, PowerCmd, and ColorConsole), ConEmu is not a replacement for the Windows CMD command prompt; it is a wrapper for CMD (or other command line applications) and new tabs default to starting CMD.

ConEmu adds a few features not available in the standard Windows console:

By way of comparison, let’s take another look at the Take Command window. (The Take Command Explorer-style Folder and List View windows, and the common Command Input window are set to Autohide in order to show a more straightforward comparison with the ConEmu window.)

*ConEmu doesn’t include a command interpreter.

Summary: If you’re a FAR Manager user and are looking for a free Windows console replacement, ConEmu is worth a look. Otherwise, it is comparable to Console2 (also an open source console replacement), and falls considerably short of Take Command.

Next time: We’ll start with the Linux console replacements.