Today we’re looking at FireCMD, a new Windows console replacement and (partial) command shell from Brainasoft (http://www.brainasoft.com). Like Take Command (and ConEmu, ColorConsole, PowerCMD, PromptPal, and Console2) , FireCMD includes a tabbed window interface for Windows console applications. Also like Take Command (but unlike the others we’ve looked at in Parts 1 – 6 of this series), FireCMD includes a command processor. Though with only 14 internal and 9 external commands, the command processor component of FireCMD is rudimentary at best, and more of an add-on to the default Windows command shell CMD.EXE than a replacement. 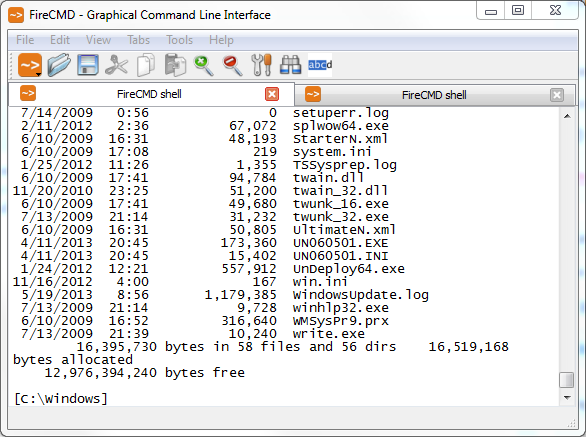 The FireCMD window displays the tabs at the top and a small toolbar on the left (there is no menu or status bar). FireCMD adds a few features not available in the standard Windows console:

#8 is the only thing in FireCMD that is not already available (in a more extensive form) in Take Command. Take Command allows you to save the contents of the tab window as a text file — nobody’s ever asked for an image file instead, though I’d be open to implementing the feature if users want it.

The output display in the tabbed windows is relatively fast in FireCMD; about the same speed as a Take Command tabbed window. (Admittedly, FireCMD is doing a lot less.)

By way of comparison, let’s take another look at a minimal Take Command window. (The Take Command Explorer-style Folder and List View windows and the common Command Input window are set to Autohide in order to show a more straightforward comparison with the FireCMDwindow. The Take Command tabbed toolbar is also not shown.) 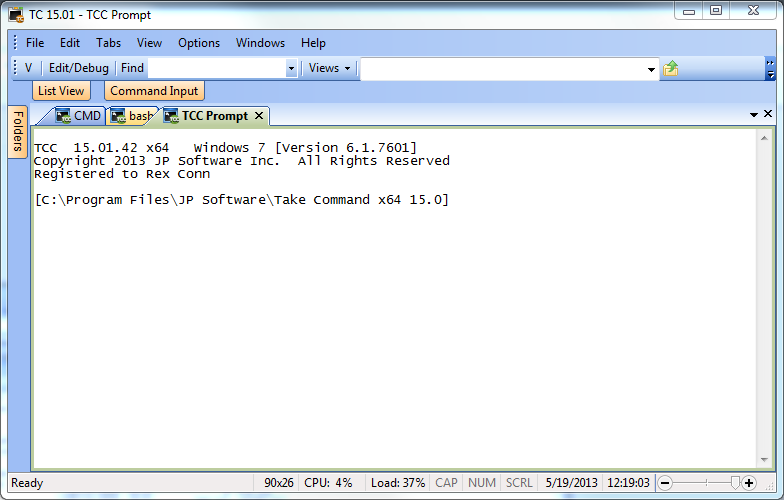 *FireCMD doesn’t include a full CMD-replacement command interpreter; you will need to run CMD or an alternative shell (bash, TCC/LE, etc.) if you intend to do any scripting or anything other than very minimal interactive command line work.

Summary: FireCMD in its current form doesn’t offer any significant advantages over the other Windows console replacements I’ve reviewed in parts 1 – 6, and it only has a tiny fraction of the features available in Take Command. It’s worth watching because of Brainasoft’s inclusion of an alternative command shell — perhaps future versions will expand the shell’s command set to make it truly usable as a CMD replacement.

Next: We’ll start with the Linux console replacements.