On one machine, the console caption is my TITLEPROMPT except during execution of a GLOBAL command, when the caption changes to "Administrator: taskeng.exe" (but not during, say, "DIR/s c:\").

On the other machine, the caption starts as, and stays, "Administrator: taskeng.exe".

I have no idea why the machines would behave differently or why, on the first machine, the caption changes during a GLOBAL command but now during other commands.

IIRC, in some previous version, the caption was "Administrator: " followed by my TITLEPROMPT.
Any ideas? Here are a couple pics. FWIW, the first computer mentioned is the local machine, the second is being accessed via RemoteDesktop. 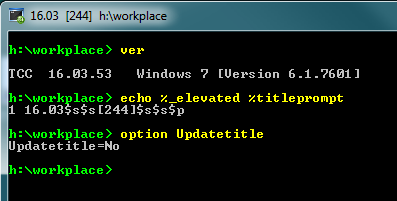 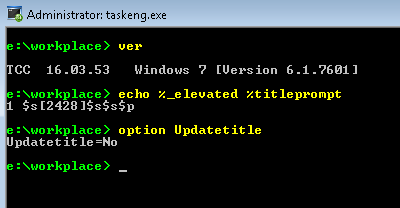 I also see a difference between the two machines without the scheduled task business. Starting TCC elevated in the more normal way, via "Run as administrator" on its context menu ...

On the first machine mentioned in my previous post, its caption is simply <titleprompt> and that changes to "Administrator: <titleprompt>" during a GLOBAL command, but not during "DIR /S c:\".

Adding .BTM to PATHEXT got my work computer to execute TCSTART.BTM. Now the behavior of the console of an elevated TCC is the same on both machines. The caption when sitting at a prompt is whatever my TITLEPROMPT specifies (only); the caption changes during a GLOBAL command and does not change during a "DIR/S c:\" command? That's odd. What determines if it changes?

In any case, when elevated, my TCSTART.BTM does

Is this caption coming from TCC? By this time I've killed TASKENG.EXE. 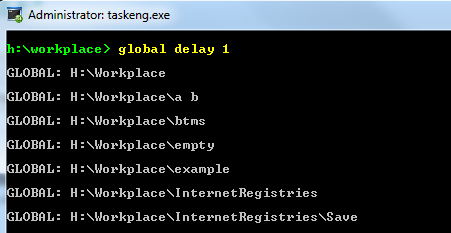 You can see this phenomenon without any elevated stuff.

running program from script and (not) returning to script

Uninstall CMDEBUG is not running

C
Running PowerShell_ISE in a Tab

B
How to get window status of a running app

running a program from cmdline versus in batch file

R
No Error Message when running mklink as limited user

J
4NT Error when running 'system' from a program to execute a .BTM

Running another batch file without CALL

Check if process is elevated?

I
TCC in Elevated mode?

Support Aug 5, 2014
Charles G
C
M
How to? Start a program on log on elevated abovenormal