Display of special characters in aliases.

Below, the way v19 (and earlier) displays my alias is (IMHO) correct and preferred to the way v20 displays it. 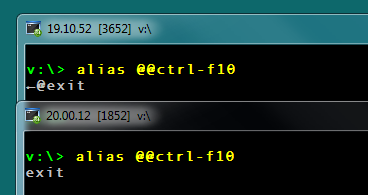 And even though the alias displays incorrectly in v20, it works correctly in v20. That is, the Esc clears any command line in progress and the @ keeps it out of the history.
Toggle signature
--
- Vince - Win10Pro/64/2009/20H2 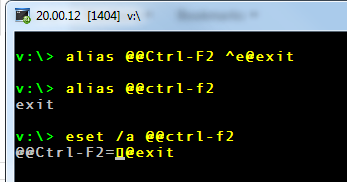 I see the pics, but nothing changed in v20 (and it's not reproducible here). 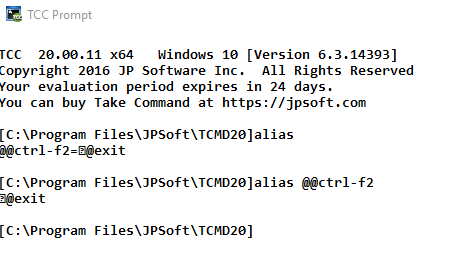 rconn said:
I see the pics, but nothing changed in v20 (and it's not reproducible here).

Are you using the same Unicode font & codepage in all TCC versions?
Click to expand...

vefatica said:
Is build 12 any different?
Click to expand...

Not in this regard. It had some changes in DEDUPE and some help text updates.
Toggle signature
Rex Conn
JP Software - Windows command prompt and batch file tools

rconn said:
Do you have ANSI turned on?
Click to expand...

With ANSI off, it gets it right.

I didn't investigate all the ramifications, but this little change, near line 850 in ANSI.C made things better.

And your fix won't work, because you're only considering <Esc>[ and <Esc>], and overlooking all of the other possible ANSI escape sequences (0x20 - 0x2F, P, X, ^, _, etc.).
Toggle signature
Rex Conn
JP Software - Windows command prompt and batch file tools

4NTv8 and every version of TCC from v11 to v19 show my alias correctly with ANSI enabled. V20 does not.

Every escape sequence listed in the help's ANSI reference and in "What's new" begins with ^e[ or ^e].

vefatica said:
4NTv8 and every version of TCC from v11 to v19 show my alias correctly with ANSI enabled. V20 does not.
Click to expand...

4NT and every version of TCC from v11 to v19 didn't support ANSI, they supported a small subset of ANSI (basically just the colorization). V20 supports a much fuller set.

Every escape sequence listed in the help's ANSI reference and in "What's new" begins with ^e[ or ^e].
Click to expand...

There are a number of additional ANSI combinations that v20 supports that aren't in the documentation yet. And they don't begin with ^e[ or ^e].

I can't wait to see the additional combinations. I thought we had just about everything useful in a Windows console and I can't imagine what new ones might do ... trigger a reboot, maybe. Has there been much outcry for more escape sequences?

Perhaps you can suggest another keystroke alias that can be issued anywhere on the command line and will cause TCC to exit without further ado and without entering anything in the command history?
Toggle signature
--
- Vince - Win10Pro/64/2009/20H2

vefatica said:
Perhaps you can suggest another keystroke alias that can be issued anywhere on the command line and will cause TCC to exit without further ado and without entering anything in the command history?
Click to expand...

How is that relevant to this topic?
Toggle signature
Rex Conn
JP Software - Windows command prompt and batch file tools

rconn said:
How is that relevant to this topic?
Click to expand...

vefatica said:
That's the alias which has displayed correctly until recently
Click to expand...

The alias still *works*, it's just not displaying the escape sequence when you enable ANSI (which thinks it's an invalid sequence and discards it). This scarcely requires you to throw everything out the window.
Toggle signature
Rex Conn
JP Software - Windows command prompt and batch file tools
E

vefatica is right in that something has changed in v20 regarding ANSI (probably directly related to adding general ANSI support for all console windows). But I think Rex is definitely right in how it works (and how it should work) in v20. I remember playing around with ANSI sequences back in the days of MS-DOS v6 (with ANSI.SYS loaded in the CONFIG.SYS file) and with calling BBS's and using ANSI terminal emulation with almost all my BBS connections, and I remember that anytime I used an ESC character (ASCII 27) followed by a character that isn't recognized by ANSI.SYS (like when putting only an ESC character and then other text, where the following character is very likely not to be recognized as part of a valid ANSI sequence), then upon displaying it on the screen (e.g. putting it in a text file and then later doing TYPE TEXTFILE.TXT), the ESC character would be discarded, and I think the following character was discarded as well. This is always the case as far as I remember. Since Rex says that the previous versions of TCC didn't directly support ANSI except for just a subset, I'm guessing that displaying them on screen as a result of certain commands like ALIAS didn't cause them to be interpreted (if it was in one of the aliases that displayed on the screen), but they would be interpreted as a result of other commands like ECHO and TYPE that display to the screen. Now that there seems to be (more or less) nearly full ANSI support, the ANSI sequences seem to be interpreted anytime they are displayed on the screen by any command (either just in TCC or in all console apps, depending on settings), and like I say, I think this is the way it's supposed to be, which again was the way it worked back in the old DOS days. I tested the alias though, and it seems to execute properly, even though it doesn't display on the screen the way you'd expect it to. If you want to see it when displaying aliases on screen, and assuming you're loading all your aliases on startup from a file, you can always add the alias directly to the file instead of adding it at the command line (and assuming you're using "^e" instead of trying to directly enter the ESC character). Then when you display aliases on the screen, you'll actually see the "^e" in the alias instead of either the ASCII 27 character or the character not appearing at all.

Actually, this works at the command line. It displays satisfactorily and works. But will it be read correctly from my SHRALIAS dump file ... let you know when I logout/login.

I haven't had any reason so far to use aliases that contain unprintable characters, but I can suggest an approach. Perhaps what's needed is a way to display an alias in hex like