You are using an out of date browser. It may not display this or other websites correctly.
You should upgrade or use an alternative browser.
J

When using 'dotnet watch run' in tcc or cmd tab, hot reloads progressively places the first character(s) from the next line at the right margin.

You can work around this by disabliing dotnet watch emojis via an environment variable:

First, what is "dotnet watch run"?

It's happens in the take command tabbed interface, I've tried both

With tcc in a cmd window it renders the text correctly, but block characters for the emojis, I suspect that's more to do with cmd.

Not a show-stopper but thought you should be aware.

I just tried in a stand-alone TCC.EXE window, and did not have the same problem;
Code:
However, it was lacking in all the emojis; 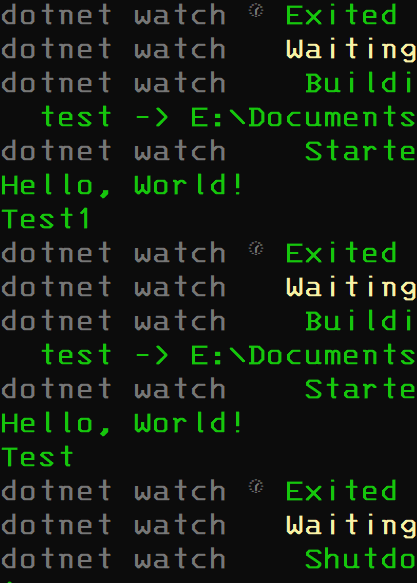 I only get a little clock, no other emojis.

Code:
...as indicated in the OP, eliminates the emojis. 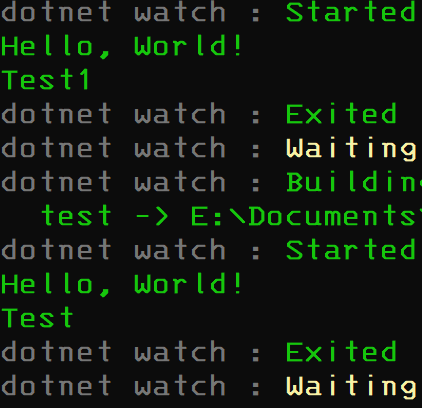 With the .NET SDK 6.0.300 and later, dotnet watch emits non-ASCII characters to the console, as shown in the following example:

Take Command tab windows are capable of displaying emojis. jemerson, what do you see if you type echo %@char[0xd83d 0xde38] in a regular Take Command tab?
Toggle signature
Charles Dye

Charles Dye said:
Take Command tab windows are capable of displaying emojis. jemerson, what do you see if you type echo %@char[0xd83d 0xde38] in a regular Take Command tab?
Click to expand...

Is there some setting that it depends on?

vefatica said:
Is there some setting that it depends on?

Well, the underlying console need to be using a Unicode font. But that ought to happen automatically ...?
Toggle signature
Charles Dye

That looks like a cat emoji to me.
Toggle signature
Charles Dye

FYI I am using windows 11 and have Windows Terminal installed. Font is Consolas in all settings for both tcmd and terminal.

I see that setting up a tcc prompt within windows terminal does show the emojis in color. Switch terminal to use conhost.exe shows them in grayscale, but without the problem of printing the first characters of the next ine.

In TC you use dotnet watch run and make a change to cause a hot reload and ctrl+c to stop the session. You will see that the prompt now has leading space between the path> and cursor dependent on how many characters have been mis-placed.

Typing at this point inserts text immediately after the test> but the cursor is off to the right.

Here I've created a dotnet new console application and initialized it as a git repository to illustrate that the effect outlasts the dotnet watch run command. 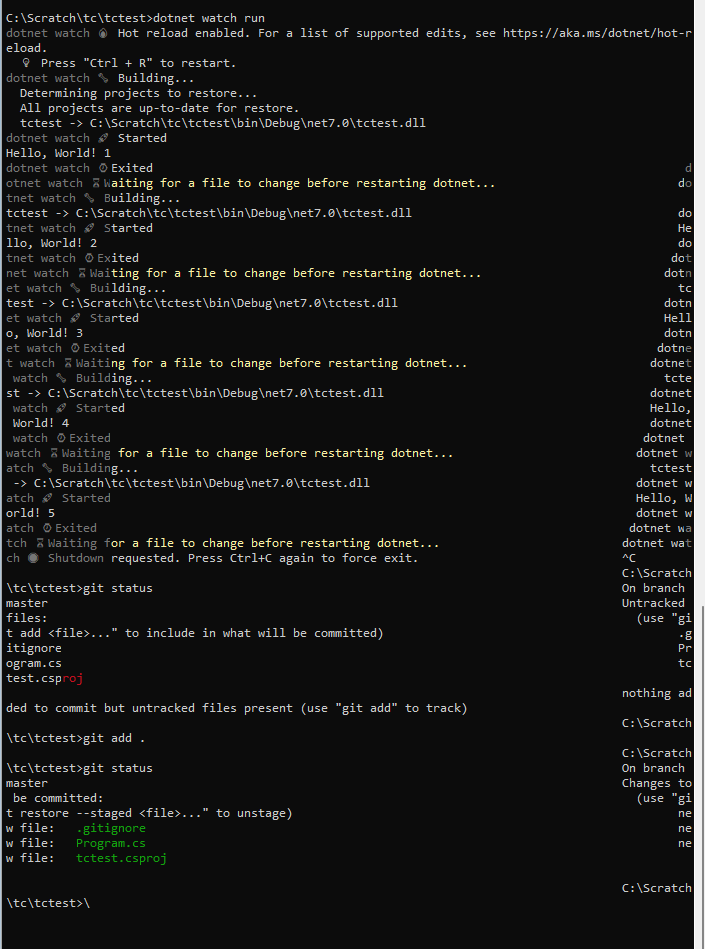 Again, for me this is not a show stopper, using tcstart.cmd to set DOTNET_WATCH_SUPPRESS_EMOJIS=1 gets around this problem. A simple : placeholder appears instead of a graphic.

watch an array variable in ide/bdebugger

What limit have I run into?

Command Will Not Run Using Short Name of Path

BDEBUGGER "Run to Cursor" - where is it ?

How to? Can 32-bit TCC be run on a system with 64-bit TCMD and TCC installed?

How to? which will run?

C
How to? run a BTM in elevated, inv tcc tab window

M
How to? Run TCC from Windows Install DVD...

Support Aug 13, 2015
mathewsdw
M
B
Batch file won't run if there is already an instance of TC 17 running

C
How to? run a batch file in administrator mode while debugging in take command software

How to? Any way to run a command in a new tab at startup?

Run As Administrator in TCMD16

B
Select and run lines from Command Input panel?

A
How to? Run a TCC command from external program

Coruption after which BTMs won't run

M
How to? Windows 7 - run TCC as admin w/o UAC intercept