How do I get rid of this button?

How do I get rid of the "Config TCMD" button on the tabbed toolbar, permanently? There's a more detailed version of this question in my recent post in the Toolbar/INI thread. 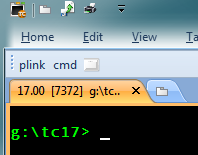 This subject has been discussed several times over the past few years. It's not TCMD-specific, and certainly not a v17 issue.

This is an interaction between Windows controls and the GUI framework (which is an extended wrapper over the Microsoft framework). TCMD is never notified that a new button has been added -- which is one reason I added the "Save to INI" option a while back. That option tells TCMD to enumerate the buttons (or other controls) on the toolbar and save them to TCMD.INI, including the ones added by Windows.

However, TCMD is also never notified about a right-click on the buttons added by Windows, so it cannot display a context menu or popup dialog to offer you a delete option. The only way you can get rid of it is to edit your TCMD.INI.
Toggle signature
Rex Conn
JP Software - Windows command prompt and batch file tools
You must log in or register to reply here.

R
How Do I Get Rid of 'Everything'

Fixed 0xc0000005 while try to create a button (Schaltfläche)

Button Cause TCMD V17 to Crash

Tab and Button Icons in Window 64

TC 11 - can the tabs on the button bar be switched off?