It seems that the installer will merrily download, but abend with an '0x00000005' permissions error. It does not seem to check and request for admin access.

After three times of this, and one by downloading the installer without tcc running, i got the hint that the 'admin' mode is required. It installs quite well then,

I am having problems installing b21 over b20 under Win7 - Nothing in the log. I have two Window User Accounts and tried installing (run as admin), under both and both failed. What is the address for the MSI installer please?
Toggle signature
Charles G - Windows 10 [Version 21H2, 10.0.19044.1826]

Isn't there some call an install can ask to elevate? I've seen some do it.
C

Whether this is a good idea without installer? I can't say ...

However: for special purposes or so, the extracting of a MSI should be not the problem with following syntax:

Charles G said:
Is it possible to extract the files and just move them to B20 folder? If so, how please?
Click to expand...

Using the executable installer, it's just

The "install logic" is in the MSI itself. The MSI dictates if it will be runing elevated. It depends on the user's ability to provide the neccessary credentials if the installation will succeed. (There is a group policy to install *every* MSI elevated without asking for credentials, but this is a very bad idea (it will also install any malware without asking ..)

You can influence under what credentials (a certain part of) the MSI will be installed with properties in the MSI itself, like ALLUSERS and MSIINSTAALPERUSER or by setting to run it elevated: 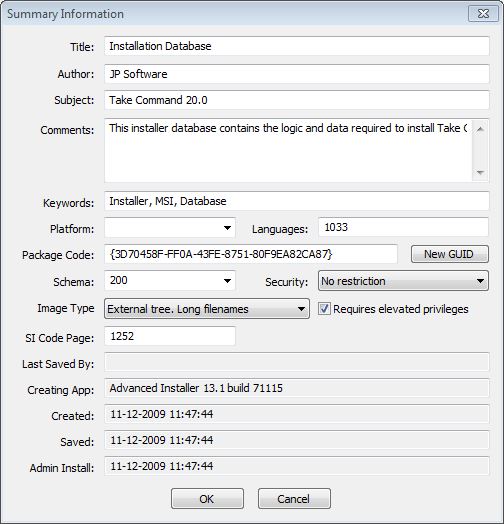 The installation itself will be done by MSIEXEC.exe, not by the Windows Installer service (msiserv). It is very common to have multiple msiexec threads running while installing an MSI. If you look, you will see they are running with different credentials.


There are a lot of reasons why this isn't working. The most likely in this case:
- Windows Installer service is not running
- Not allowed to extract the files (access denied)
- The MSI itself (after just a quick look):
There are considerable differences in the MSI's between build 20 and build 21. By removing the InstallerAnalytics (the track& trace telemetrics component of Advanced Installer), 32 bit files are installed in a different way in build 21. And I believe Charles G and w_krieger are both running 32 bit Windows. Probably no problems on 64-bit Windows versions.
Last edited: Oct 4, 2016

In the end, i just downloaded the thing from the jpsoft site like a new install, and installed it as 'run as administrator' mode on the tcmd20.exe file.
M

w_krieger said:
In the end, i just downloaded the thing from the jpsoft site like a new install, and installed it as 'run as administrator' mode on the tcmd20.exe file.
Click to expand...

Good to know; it might help other people with the same troubles.

MaartenG said:
And I believe Charles G and w_krieger are both running 32 bit Windows. Probably no problems on 64-bit Windows versions.
Click to expand...

JQS, don't you get rather more of those than you need? I certainly do.

vefatica said:
JQS, don't you get rather more of those than you need? I certainly do.
Click to expand...

I've been out of the install loop since TC16. I was able to use TC17 by manually extracting and copying the files to a folder (I primarily use it at work; not enough home use to justify purchasing upgrades so I skipped TC18 and TC19). However, now that @MaartenG found the key to getting it working again (manually registering the license dll in HKCU instead letting the installer try to modify HKLM) I've started using it again. I still have to manually extract and copy the files, but I can deal with that, so yes, I still get to see all the folders, but I delete them after the files have been copied out of them.
Toggle signature
Whenever someone says "pls" because it's shorter than "please", I say "no" because it's shorter than "yes".
C

I keep all the folders for the main, current version. So for now just the ones that start off with:

JohnQSmith said:
I still have to manually extract and copy the files
Click to expand...

I wrote a script to automate this. Just drag the installer .exe and drop it on this script (or specify it as a command-line parameter) and a few seconds later you're done .

The primary reason why I wrote it, is that I removed quite some files from the TCMD folder (no need for Russian, etc) to keep it "clean".
Every new build I had to plough through all the files and copy only the neccessary ones.
The script will therefor only update the already existing ones (excluding INI-files; they will be preserved).

It will close opened Take Command applications (after asking).
The script can not be run from TCC /TCMD (that is like cutting the tree where you sit in (on?)).

The install runs quite well if ye run it as an administrator. What the issue is, is that when you run it from the options box inside tc,exe, you don't get the chance to upgrade the thing to administrator mode.
M

My response was aimed at @JohnQSmith as he has no option to run/install anything elevated.
I think "your" problem is somewhere in the Advanced Installer script, which this method doesn't use.
Hopefully the installer gets fixed in a next build.
You must log in or register to reply here.

A
Installer /extract: extracts into current directory if target not exists

How to? Single installer?

Small things to change in installer and after installed Everything

D
/extract: option for the installer

Another Problem with The Installer

S
How to? Install from same installer copy after cancelling previously

S
How to? Find installer downloaded by "option /u"?

H
V15 installer difficult to use with JAWS screen reader

More on the installer

How to? Archive Installer