Windows Scripting Host seems to only care about the package section of a file, and ignores everything else.

This .BTM can also be used as an .INI file.

Thus, the first part of this .BTM is TCC code,
the second part is VBScript/JScript code,
and the third part is an .INI file.

I'm posting this mainly for my future reference, but others may be interested also.

I tried to post the code for the .BTM in the forum, but it would not allow me to post it, saying that I had been blocked.

As the .BTM also contains WSF code (XML code), I'm thinking that is why I was not allowed to post it.

But I can't get it to work in a TCC library function. It seems to depend on more than the "package" section.

My library file is D:\data\tcclibrary\sv.btm. Since %0 doesn't make sense, I hard-code the file name into the cscript call, like this.


Code:
The tail of the library file looks like this (in VIEW). 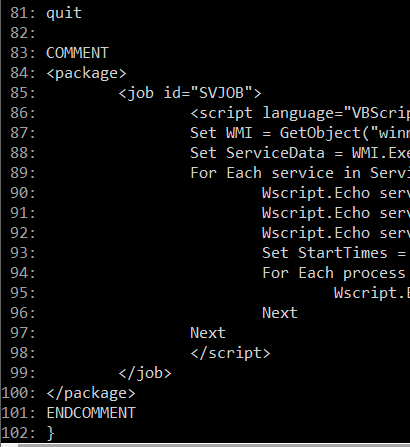 When I execute the library function, I get 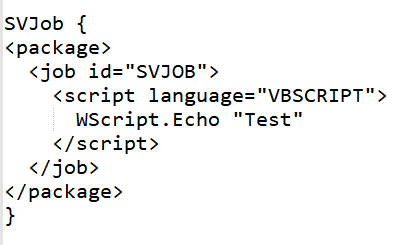 Note that I have other functions/code in my file vb.library.

From the folder where the vb.library file is located;
Code:
I then went and added COMMENT ENDCOMMENT, then;
Code:
and still did as it was supposed to.

My library file had a few lines like this one.


Code:
I don't know why but they screwed things up. All was OK when I changed them to the likes of

The ampersand (&) is a reserved character in XML.

For example, if I make a library function, thus;
Code:
...the XML Parser sees the ampersand (&) in the TCC code, and thinks that it is part of the XML code.

Joe Caverly said:
The ampersand (&) is a reserved character in XML.
Click to expand...

Day Of Week...Microsoft vs. TCC

M
Script to resize the TCC-window with cursor keys

Call Methods from ActiveX (COM) Objects from the TCC CLI

J
Restart a batch file started in cmd in TCC(LE)