Nested setlocal gives problems with aliases resolving in DO /P

You are using an out of date browser. It may not display this or other websites correctly.
You should upgrade or use an alternative browser.
N

There is a problem when we used nested setlocal.

We have two batch files
DO_P.btm

If we remove the dummy call in DO_P it works
or we remove the setlocal from dummy.btm
or we redefine the alias CL_grep to %@ALIAS[CLPATH:]\grep.exe

How do we solve this issue?
Reactions: Alpengreis

Which version of TCC are you using?

It's OK here with TCC 28.02.18 (and back to TCC v24), imitating your example the best I can. The grep error message is coming from line 4 where CL_grep is called with no arguments. Otherwise, I think this (below) is what's expected. From the TCC error message I'd guess is that the CLPath: alias does not exist or is not referenced correctly. If your TCC is not up to date, it might be a bug that has been fixed.

Just before the DO /P the command CL_grep is executed with no parameter so the command executes and the CLPATH: is resolved.
Maybe the global /local aliases makes the difference.

Here global/local made no difference. But in the local test I had to manually create the aliases.
Toggle signature
--
- Vince - Win10Pro/64/2009/21H2

Here global/local made no difference. But in the local test I had to manually create the aliases.
Click to expand...

Before and after the call dummy the CLPATH: is ok.
In the next line DO /P ... TCC do not resolve the CLPATH: alias.

CL_grep is run in a new instance of TCC. With global aliases, that should be OK. Do you use a TCSTART.BTM? If so, does it do anything that might mess with the aliases?
Toggle signature
--
- Vince - Win10Pro/64/2009/21H2
N

TCSTART.BTM is used and there the aliases are loaded if not already defined.
Also the library file and functions are loaded at first start of a TCC session.

Here's a simple test. It will show you if you have the CL* aliases in a piped instance of TCC. You could also put that in your BTM right before the DO with the failing call to CL_grep.

Maybe the problem is solved.
The %_SHELL test in the STARTUP.BTM is removed.
Now its seems to work.

niros said:
Maybe the problem is solved.
The %_SHELL test in the STARTUP.BTM is removed.
Now its seems to work.
Click to expand... 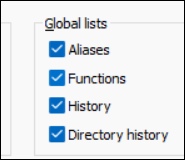 Options all global is that enough?

BTW now a error in the STARTUP 'No functions defined'

niros said:
BTW now a error in the STARTUP 'No functions defined'
Click to expand...

The /GL switch does this.
If we add the /GL switch by the ALIAS /R command 'No aliases defined' message also appears.
N

it seems that the ALIASEN are not global to a secondary shell?

In nested 'setlocal''s the secondary shell does not get the global aliasses.

Workaround for now by changing TCSTARTUP.BTM
Removed the /GL switch from the function command for the no function message
Removed the %_SHELL == 0 test so the aliasses can be loaded (if necessary) in secondary shells.

Thanks for the assistance and the quick responses.
Last edited: Jan 3, 2022

niros said:
In nested 'setlocal''s the secondary shell does not get the global aliasses.
Click to expand...

They sure do here!


Code:
My TCSTART.BTM is quite simple.

No not a [primary] or [secondary] in TCMD.INI
Add your first line of STARTUP.BTM to my startup

I'm really curious about what's going on. Try adding this (use CL* to get both aliases).

OK, I see that it's quoted. But TCC is seeing the whole thing as the name of the EXE.

So now I have this.


Code:
And I removed the ""s from the regular expression (they weren't needed). Now I get


Code:
which is better but still not good.

I also see that it works without the call to DUMMY.BTM. And it works if DUMMY.BTM doesn't setlocal/endlocal.

Somehow, the CALL to a BTM with SETLOCAL/ENDLOCAL is messing up the alias expansion. That seems wrong. If I can't find a quick fix, I'll condense the problem into something small and start a new thread. Hopefully, Rex will chime in.

B
Problem with color in nested shells

R
Problem with %_do_loop in nested do loops

Broken For and nested Do

Single-line DO inside nested multi-line DOs?

M
A problem with nested Gosub's/ExecStr's

J
Nested for loops and quotes

M
How to? Does the "Do" command effectively do a "SetLocal/EndLocal"???

H
Help for SETLOCAL in TCMD11