My OS is Chinese Windows7.
Typically, a Chinese character display to take up the width of two English letters.

However, TCC does not handle this correctly. The most obvious is in the command line, if you enter some Chinese, the cursor can not correctly locate.

When the input of this command, the cursor stays in the "d" position, even if you press the key "End", is the same. I think this is the command line, there are 3 Chinese, the display takes up the width of 6 English characters, but TCC only calculated the width of their 3 English characters. So the cursor position is wrong. The same problem also exists in "dir, list ..." and other commands related to the display output.

It is for this reason, so chinese users can not use the normal TCC, it is estimated that other users, such as Japanese, Korean is so problematic. Very much hope Rex Conn can solve this problem, very grateful!

What version of TCC are you running?

rconn said:
What version of TCC are you running?

What code page are you using?
Click to expand...

Is this in a stand-alone TCC console window, or in a TCMD tab window?

In a console window, TCC does not control the cursor position (unless you use one of the editing keys); that's done by Windows itself. In a TCMD tab window, TCMD queries the (hidden) console for its current cursor position and uses that.
Toggle signature
Rex Conn
JP Software - Windows command prompt and batch file tools

This is in the TCC console window. TCMD tab windows are more incompatible with this can not enter the Chinese, display output is also half of the incomplete Chinese characters, so I never use it. 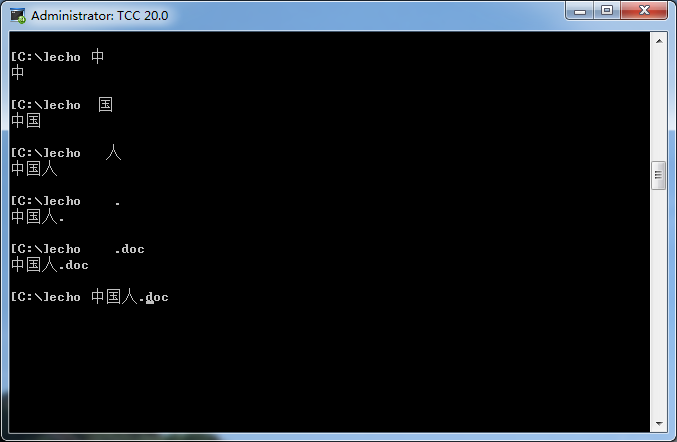 What are the values of those double-width Chinese characters (trying to create some here but I can't do it). I.e., alt-numpad values at the prompt.
Toggle signature
Rex Conn
JP Software - Windows command prompt and batch file tools

Please try the test build at:

(This has a fix for a broken Windows API when determining the width of a console character.)

I tried this test build, It's same.

Then I cannot reproduce your problem -- the test build works for all double-width characters that I tried.

You can use the "ReadConsole=Yes" directive in your TCMD.INI file ([4NT] section); that will tell TCC to use the Windows line input (ReadConsole) API for all input, instead of the character input that TCC normally uses. Using ReadConsole means you'll be limited to CMD.EXE-compatible line input features; i.e. none of the TCC editing, tab completion, or cut & paste.
Toggle signature
Rex Conn
JP Software - Windows command prompt and batch file tools

I tried the "ReadConsole=Yes", running TCC, kept on the output ^ C

You may be using the English version of windows, so can not reproduce my problem.

As long as the following settings, you can reproduce the problem in English windows 7:

2.Run TCC. Paste "echo 中国人.doc" from here, then enter.
Or use notifications area, select the language CN and input method for input Chinese, you will be able to properly display the Chinese and found the problem.
Last edited: Dec 26, 2016

In addition, the list command can not support Chinese

dir command can not alignment on the Chinese filename than English filename. 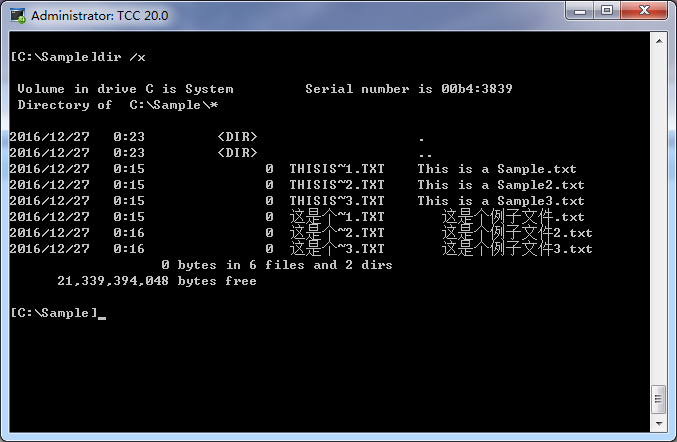 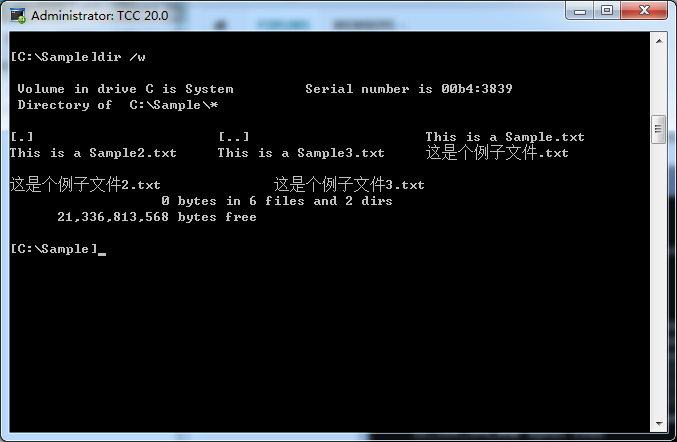 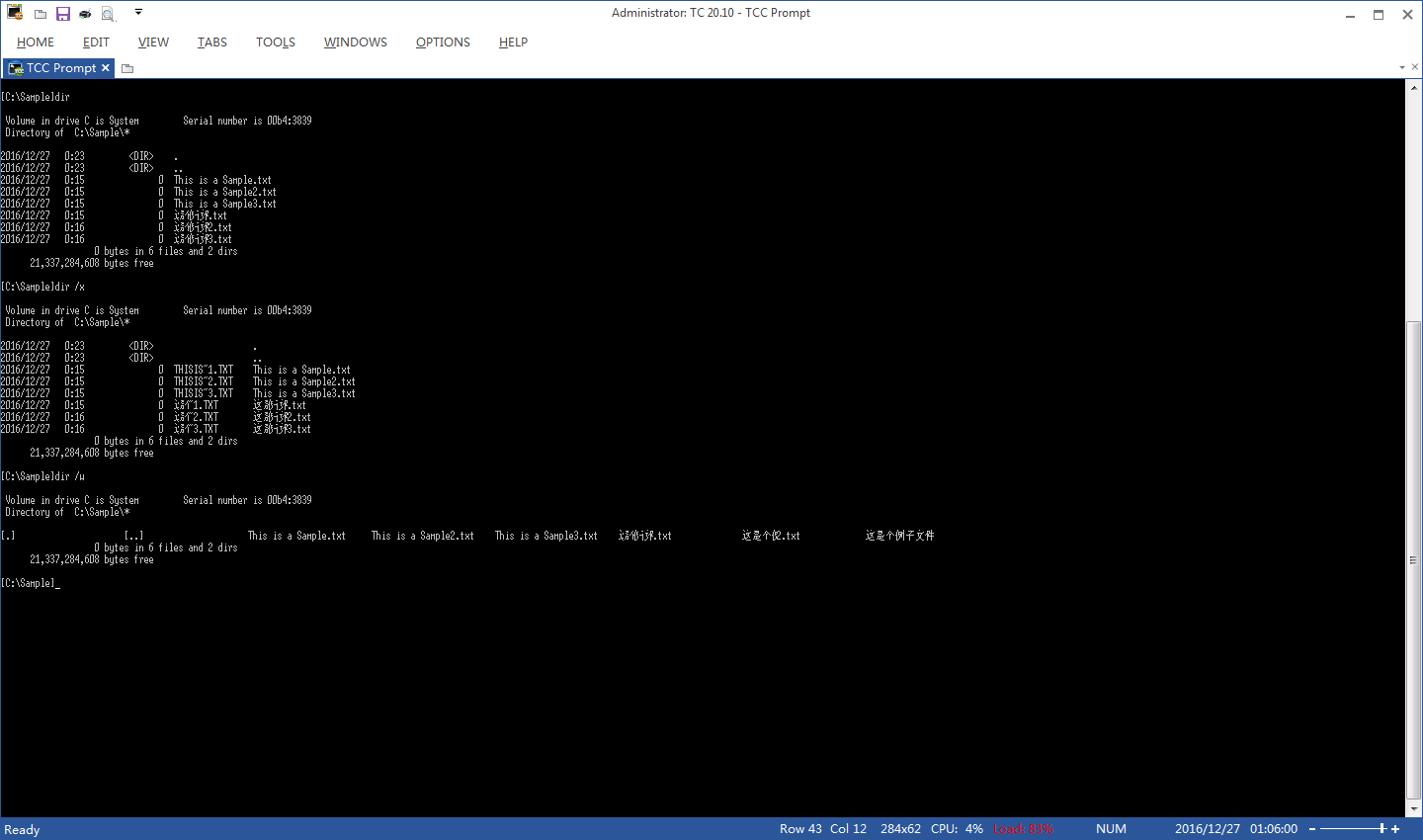 Gamegod said:
In addition, the list command can not support Chinese

The LIST command is obsolete and has been deprecated for several years. It was replaced with the VIEW command.
Toggle signature
Rex Conn
JP Software - Windows command prompt and batch file tools

Gamegod said:
dir command can not alignment on the Chinese filename than English filename.
Click to expand... 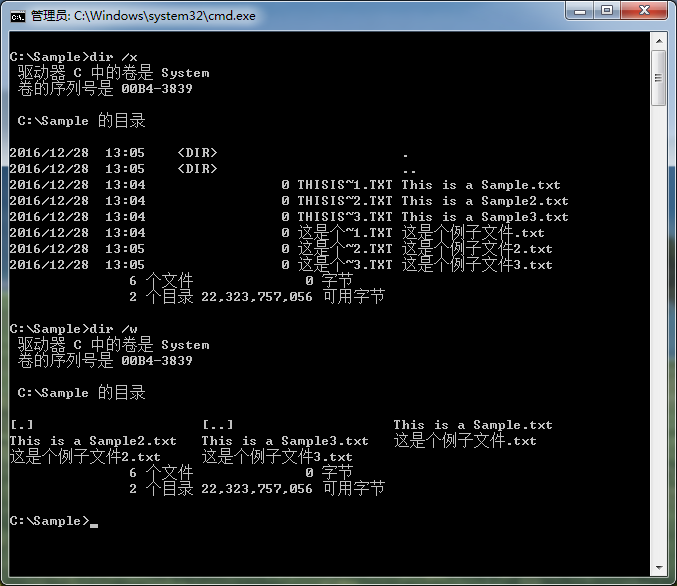 Everything is working for me in Windows 10. I tried a Windows 7 VM this morning, and I can now reproduce the problem you're seeing.

There are five documented APIs to return character widths in Windows; three fail with double-wide characters in Windows 10 and two work (one of which TCC 20.11 is using). In Windows 7, all five of the APIs fail. I'm going to have to experiment some more to find a kludge that will work in Win 7.
Toggle signature
Rex Conn
JP Software - Windows command prompt and batch file tools

Look forward new version, All the appreciation and thanks!

The cause of the "Language for non-Unicode programs" setting ? 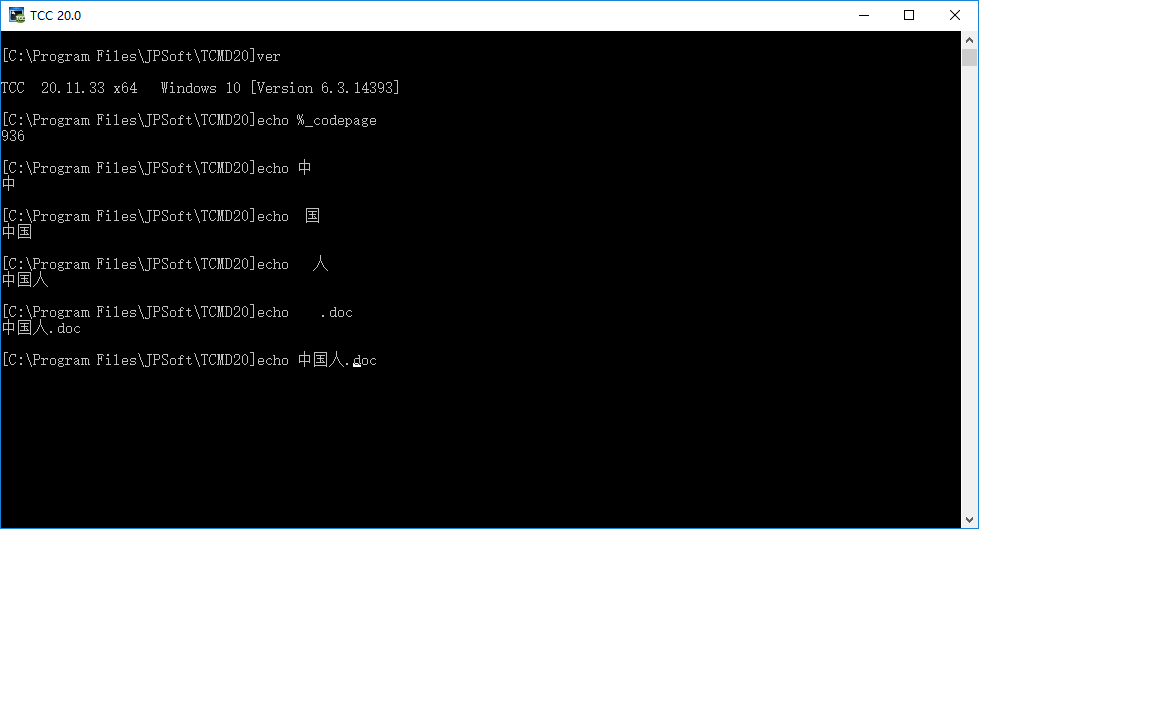 AWESOME! Finally fixed, the Chinese input work well !
"dir / w" OK.
Just "dir / x" there are some problems.
Take the liberty about, the way to "list" command also fix it? 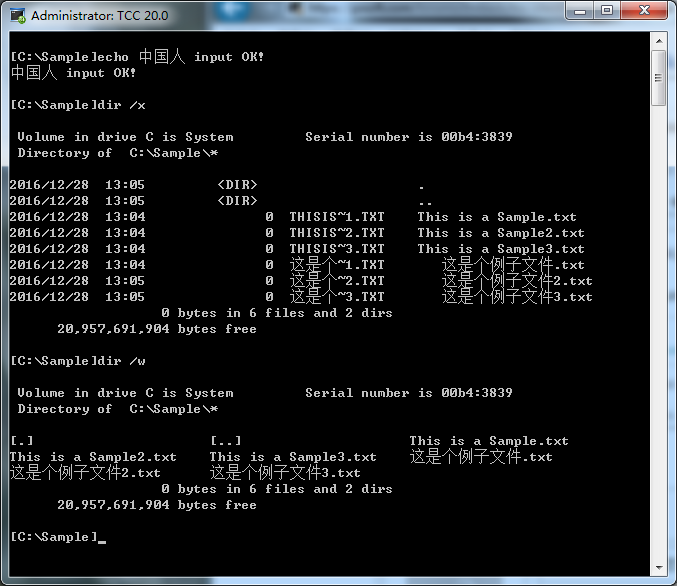 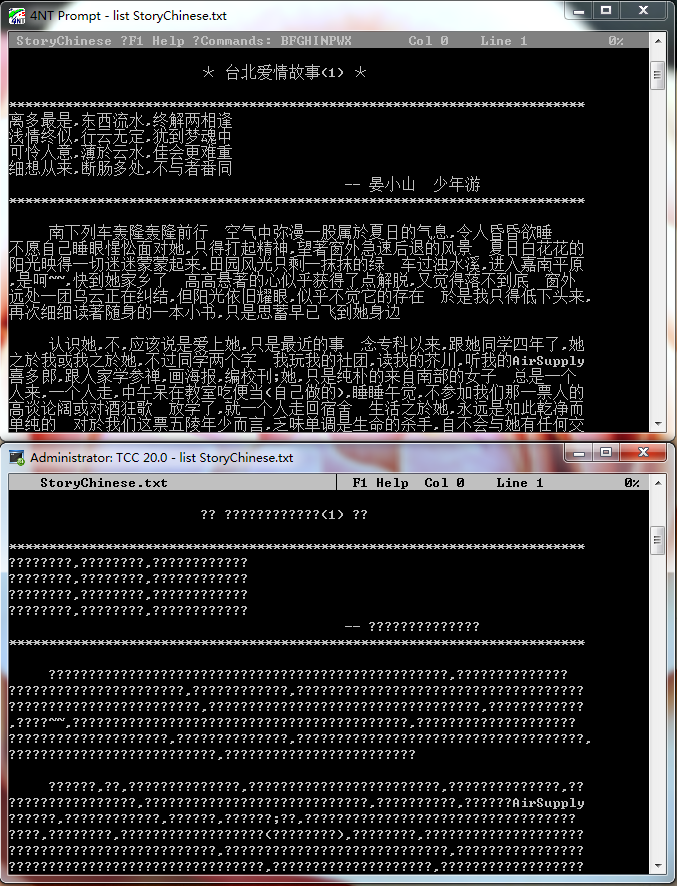 There is a small part of the Chinese characters can not normally identify the width.

Regarding LIST, as I said before it's been deprecated for several years and I don't intend to make any changes to it at this time. Does your file display properly in VIEW?
Toggle signature
Rex Conn
JP Software - Windows command prompt and batch file tools

DIR /X has been obsolete for more than 15 years. Do you actually have a need for it?
Toggle signature
Rex Conn
JP Software - Windows command prompt and batch file tools

I'm just used to the "list", it is more like the original "more", only in the command line window, do not pop up a new window. Do not mind, forget it.
Since there is no DOS, short file names and "dir / x" is useless, I just report this problem.

Thank you rconn! Thank you for bringing great software!

TCC 20.11.38 has completely fixed this problem. TCC perfect support for Chinese!
Now only Take Command does not support Chinese.
You must log in or register to reply here.

RECORDER - TCC: (Sys) A resource required for this operation is disabled.

A
Can you set an image file 'tag' with TCC/4NT?

P
PSHELL not working in TCC 26

C
How to? starting TCC/TCMD v25

TCC and TCMD in Powershell

L
FTYPE in TCC, less quirky than in cmd.exe

How to? tcc inifile (%_ininame)

M
How to? Black TCC Prompt

D
Differences between TCC and CMD with COPY /b

Can I turn off the minimize to tray mechanism in TCC?

N
Command execution slows down in TCC Prompt after a while

How to? Is this doable in TCC?