You are using an out of date browser. It may not display this or other websites correctly.
You should upgrade or use an alternative browser.
M

Ok, it's official: I'm lousy at coming up with catchy, fitting titles.

This default clickbait title seemed just as bad as:
"A script to create a dialog box to load / view / edit (user) settings that be will used for the current session with an option to save these settings in the script itself for future use.
Includes an option to revert these settings to factory default."

Although the latter one describes the functionality a little better. 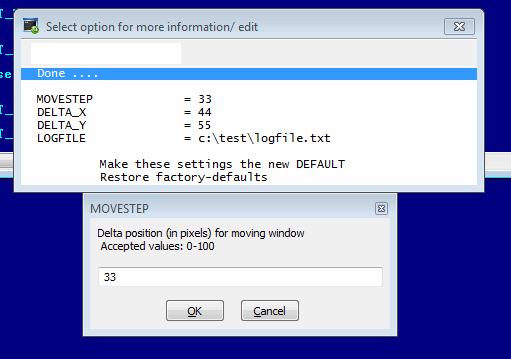 Not exactly spectacular.
The interesting part lies in the way these settings are saved: in the script itself.

There are the@FILE* and @FILE*B functions to do so, but these seemed overly complicated (to me, that is).
Then I remembered that the INI functions on Windows are very straightforward.
For example, if you want to find the value of MouseWheel under [4NT] in a file:

, It just reads the file until if hits [4NT] and then reads until it finds MouseWheel. (or hits **EOF** or another [header] ).
You could even put the contents of an INI file in a DLL and it still would find it! (*)

So I just put the settings in the .btm The script "jumps over" the part where the settings are, but @INIREAD and @INIWRITE still know to find it.

Code:
Seems a little chaotic, but only while coding. In the "GUI" this is no problem.

A few other scripting techniques were used that might be useful. For example: it was not trivial to load all the settings from the "INI" part of the script as environment variables (there is no function to read all of the settings under a specific [header] ). Check out the script if you are interested.

(*) Not recomended, of course. The DLL will lose it's integrity and there could also be multiple **EOF**'s in this DLL, which might cause the @INI.... functions to quit to soon.

Could it also be done like this;
Code:
Joe
M

Hello Joe :-) (your script works fine :-)
You mean by placing the ini-settings at the end of the script? That will work. And also take care of the skipping part. And thus make the code "cleaner". Good idea!
It was just out of habit that I placed this in the beginning of the script (my usual order: settings, initialization, main, subroutines,syntax).

BTW: In this specific case, the INI-settings are placed inside a textblock inside a subroutine:

This subroutine is called several times, each with a different %SETTINGS_COMMAND to do different things with the data inside the TEXT block.
So, in this case the subroutines "block" would be the sweetspot.
Thanks!
You must log in or register to reply here.
Share:
Facebook Twitter Reddit WhatsApp Email Share Link
Top Bottom