Take Command is composed of four elements which work closely together:

Take Command Environment - A rich development and operations environment that allows you to:fs

TCC (Take Command Console) - A command processor upwardly compatible with (and a replacement for) CMD.EXE, the default command processor in Windows XP / 2003 / Vista / 2008 / 7 / 2012 / 10 / 2016. TCC is substantially enhanced with thousands of additional features, that provides the ability to:

Take Command Language - A mature scripting language based on and compatible with CMD.EXE, but massively enhanced. It includes:

Integrated graphical IDE with tabbed edit windows and a batch file debugger (compatible with CMD or TCC batch files), with:

Before Xerox created the concept of the graphical environment in the late 1970’s, there was the command line. Typing versus selection with a mouse. Most people like windowing systems better, but, to this day many people still do much of their work at the command line because for many tasks, it’s a lot more efficient.

In Take Command, the GUI and the command line work together to make you more efficient:

Why Did We Do This?

A lot of people ask us why we merged a Windows Explorer Type File Manager with a Tabbed Console Manager. Invariably their first reaction is to ask us how to get rid of the Explorer components. A week later they are using the new capabilities every day and are asking for more.

It’s pretty simple. First, some simple activities are easier to do in a graphical environment, so having the File Manager right there makes it simple to do these things without having to go look for the Windows Explorer. Second, when you are working at the command line and manipulating files, you can see the results immediately of the actions you have taken. Third, you can drag and drop file names into the console.

All in all, it turns out that these capabilities really do save you time. You will wonder why no one did this before! The key elements of the interface are:

1. Menu Bar -- This is an enhanced Windows Menu Bar. It allows access to the basic features of any Windows program, such as cut and paste, option, help etc. You can move it and redock it, customize it, and assign shortcut keys.

2. Folder View --The Folder View is similar to the standard Windows Explorer Folder tree view. You can see all of the primary system devices (disk drives, network devices, etc.) and expand or collapse them to see the underlying folders structure. You will not see any files in this view.

In the upper right hand corner of the Folder View is a “pin”. If you select this pin, it will put the Folder View in autohide mode to increase the amount of console workspace. Putting the cursor over the resulting folder tab on the left side of the screen will bring the view back. You can return to the normal state by selecting the pin a second time. This also works for the List View.

You Can Change the List and Folder Views from a Console

You can also make the Folder and List views change to follow actions in one of the consoles. Type in the following at a console prompt and watch the results:

3. List View -- List View shows the files (and folders) within the selected item in Folder View. As you change the selection in Folder View, this will immediately change to follow. You can also cause the folder view to follow actions in the console

4. Console View -- You can open up one or more consoles as individual tabs (a la Firefox) in this section. There are several ways to add a new console tab:

5. Find - Find will look for a specified text string somewhere in the active console tab. You can also search using regular expressions. The Find tool keeps a recent history of your searches that can be recalled in the drop down list.

6. Views -- Allows the List View to be configured as:

7. Folder History -- Provides a history of the most recent directories selected in the Folder View. Previous directories can be recalled in the drop down list. You can also type a folder name directly into this field to go to that folder.

8. Filter -- You can filter what is displayed in the List View by entering a filter string here. For example,

9. Edit/Debug -- Pressing this button will open a edit/debug session. In this new window, you can edit and debug batch programs written in CMD’s language and the vastly extended TCClanguage. This is discussed in more detail in a later tutorial. It’s also useful to note that the editor and debugging functions will work with CMD.EXE batch files, offering a much improved development environment.

10. Tab Toolbar -- The Tab Toolbar allows each user to configure up to 20 toolbar tabs (with up to 50 buttons each) to execute common activities. These buttons can execute:

To set up a new button, right click on an empty part of the Tab Toolbar, and select “Add button”. (You can modify an existing button by right clicking on the button.) This will pop up the following dialog: 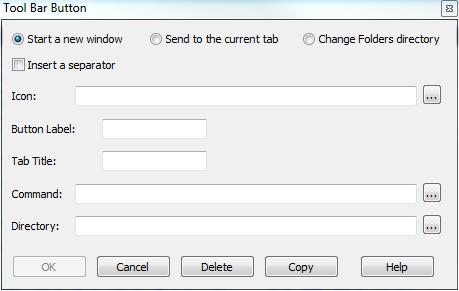 A Note on Keystroke Interpretation

If the tab is sending keystrokes to the current tab, the text is in the same format as the KEYSTACK command in TCC.

Text entered within double quotes, e.g., "abc" will be sent to the active console application as is. The only items allowed outside the quotes are key names, /W options, and a repeat count.

If keyname is a number, it is interpreted as an ASCII character value.

Repetition. To send keyname several times, follow it with a space, left bracket [, the repetition count, and a right bracket ]. For example, the command below will send the Enter key 4 times:

The repeat count works only with an individual keyname. It cannot be used with quoted strings. You must have a blank space between the keyname and the repetition count.

If you exit by choosing the OK button, any changes you have made will be saved in TCMD.INI, and reloaded automatically the next time you start Take Command. If you use the Cancel button, your changes will be discarded.